Most analysis of the relative costs to operate electric vehicles (EVs) and vehicles with an internal combustion engine (ICEs) use national average data, or a mixture of state-specific and generic data. This broad approach can mask important state-level differences in relative fuel prices which can dramatically shift the relative fuel costs for EV and ICE owners. This second report in our series on EVs and ICEs examines the impact of state-level differences in electricity and gasoline prices.

In this analysis, we compare the fuel cost per mile that a typical driver in each state (plus the District of Columbia) would have incurred in 2016 driving a Chevy Bolt or a Chevy Cruze. These vehicles were chosen as they are roughly the same size and target the same buyer demographic. According to the EPA, the Chevy Bolt’s fuel efficiency (in miles per kWh) is rated 3.85 City/3.23 Highway/3.57 Combined, while the Chevy Cruze’s fuel efficiency (in miles per gallon) is rated 30 City/40 Highway/34 Combined. We used the Combined value for each vehicle, assuming that the average owner’s driving habits would be the same regardless of the vehicle they are driving. 2016 is the most recent year with available state-level data for gasoline prices, residential electricity tariffs, and miles driven.

Figure 1 below shows the average cost per mile for the Chevy Cruze (ICE) based on the EPA reported Combined City/Highway fuel economy and the 2016 average gasoline price (US$ per gallon) for each state. As noted in our previous paper on this graphical methodology, the intersection of the fuel price and vehicle fuel efficiency is compared with the diagonal indicators to estimate the resulting cost per mile. 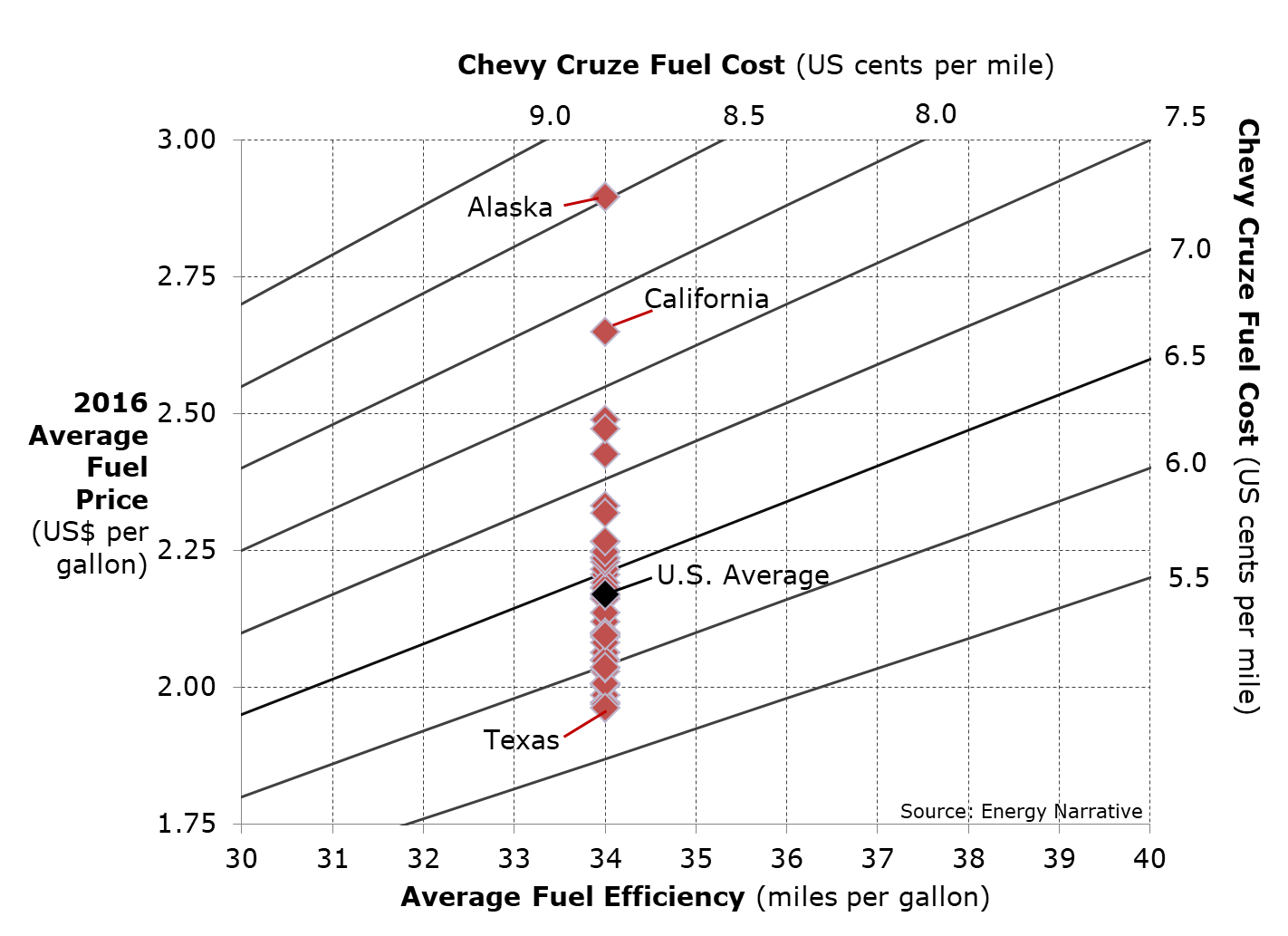 Figure 2 below shows the average cost per mile for the Chevy Bolt (EV) based on the EPA reported Combined City/Highway fuel economy and the 2016 average residential electricity price (US cents per kWh) for each state. As noted above, the intersection of the electricity price and vehicle fuel efficiency is compared with the diagonal indicators to estimate the resulting fuel cost per mile. 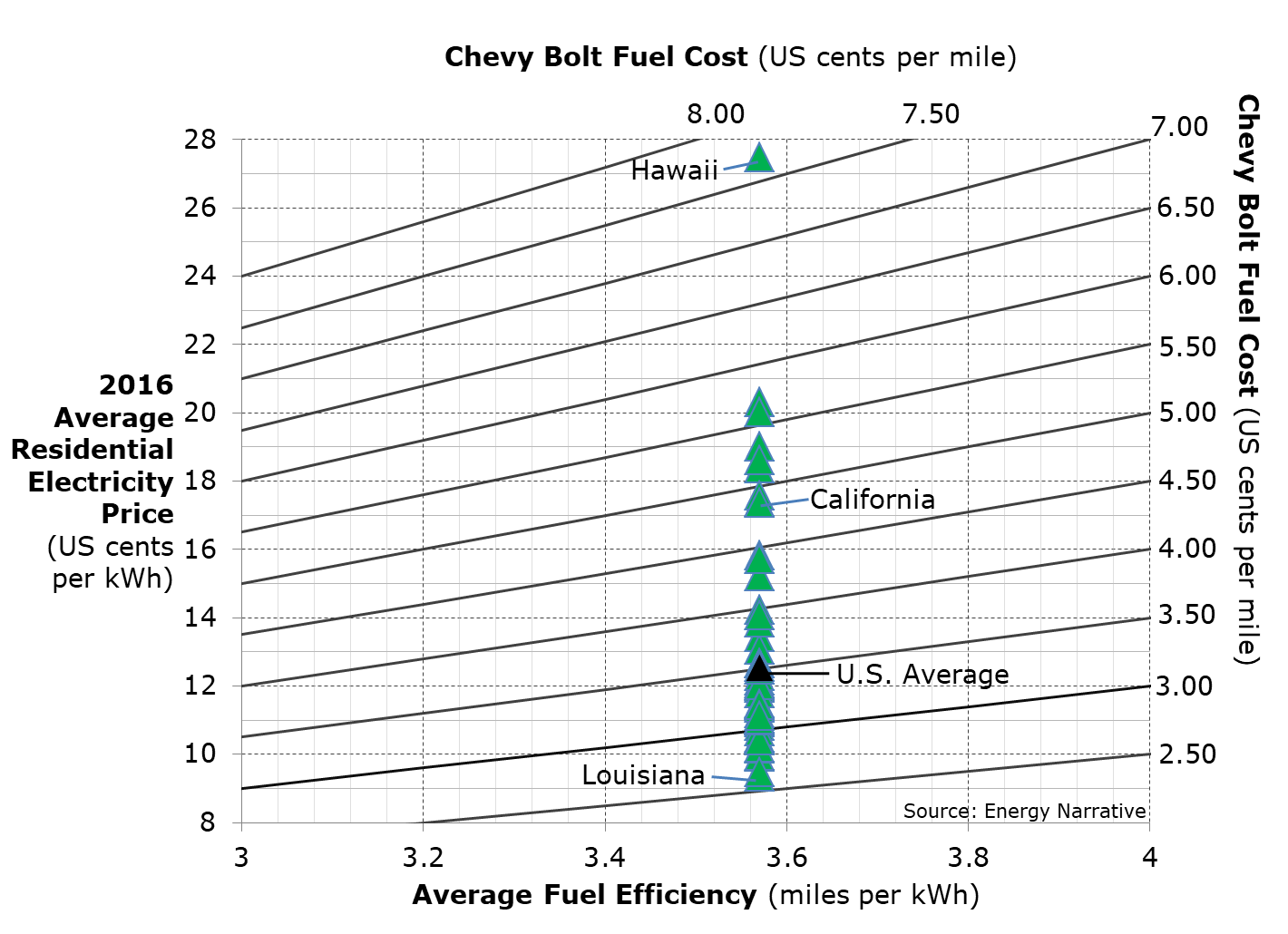 Figure 3 below compares the fuel cost per mile for the Chevy Cruze and the Chevy Bolt for each state. In this graphic, the center diagonal line indicates the same fuel cost per mile for the Cruze and Bolt. In the area below the center diagonal line the Cruze is more expensive per mile than the Bolt; the farther the data point is from the central diagonal, the greater the difference in fuel costs. 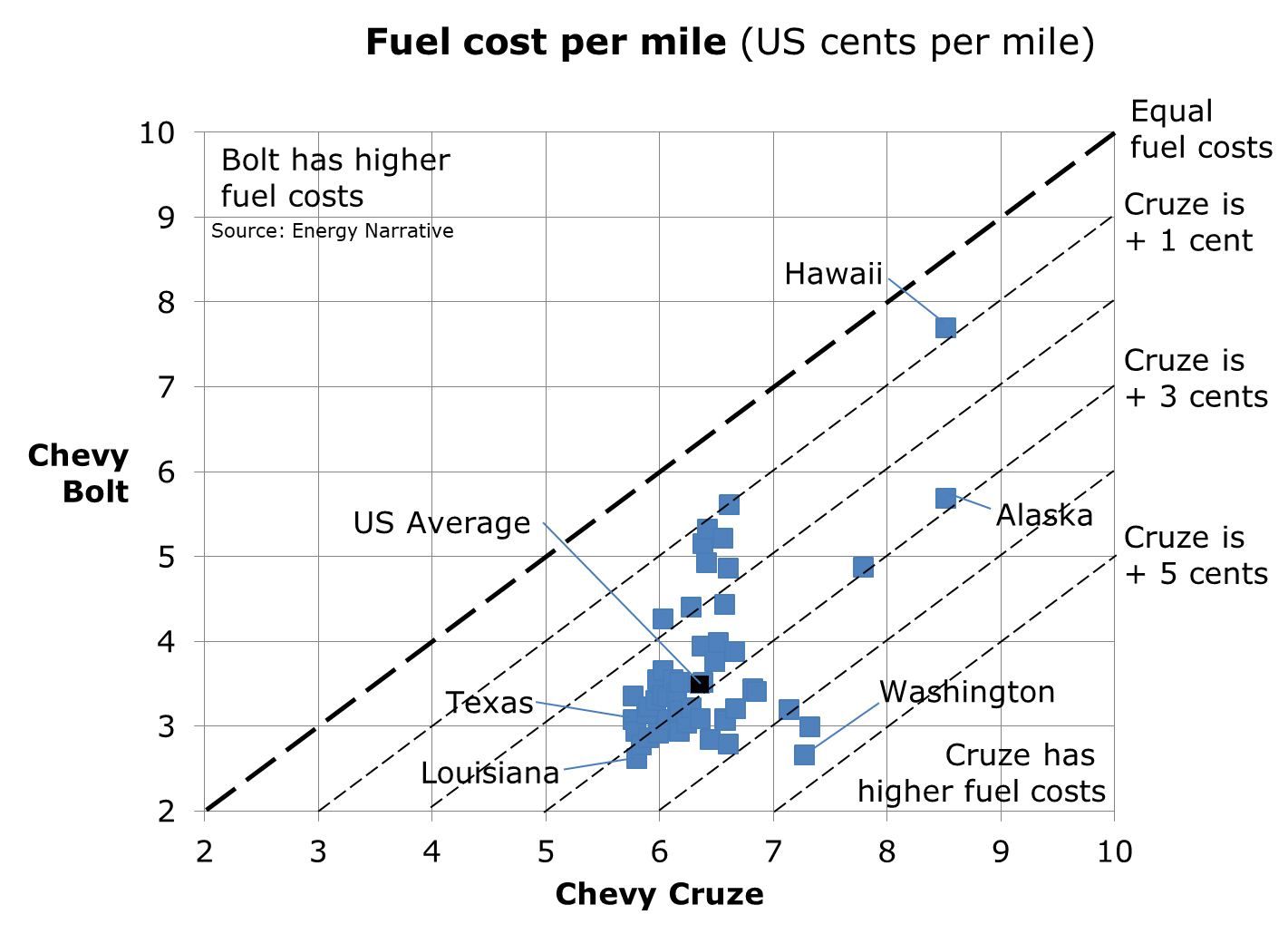 Here, Hawaii is the state with the highest overall fuel costs (highest in electricity and tied with Alaska for gasoline), and also the smallest price difference between the two (and, therefore, the smallest benefit in fuel cost savings at just under 1 cent per mile).  States with very low electricity prices, such as Louisiana, tend to also have low gasoline prices, limiting the benefit in switching to the Bolt to roughly 3 cents per mile, which is in line with the national average.

The state with the highest benefit in fuel cost per mile is Washington state, where gasoline prices are slightly higher than average (US$2.47 per gallon), but electricity is very cheap (9.48 cents per kWh, driven by low cost hydropower in the region). Here the difference in fuel costs for the two vehicles is 4.62 cents per mile. Because it is the difference in electricity and gasoline prices that counts and not the actual price of either, the Bolt’s fuel cost advantage over the Cruze is roughly the same in Alaska as it is in Texas, even though fuel costs per mile in Alaska are nearly 50% higher.

The cost per mile is one component of vehicle owners’ total fuel cost. The total miles driven each year is also important—a gas guzzler that is never used has no fuel cost. Our next report in this series compares the average annual vehicle miles traveled in each state to see how the annual fuel bill for the same two cars stacks up.