Using the EPA Combined City/Highway fuel mileage ratings to pick a new car could undervalue electric vehicles’ (EVs’) fuel savings for those that would benefit the most from switching to an EV. Accurately estimating an EVs fuel savings requires a more nuanced assessment of how the car will actually be used.

The EPA estimated Combined City/Highway rating assumes the vehicle is driven in City conditions (low speed, frequent starts and stops) 55% of the time and in Highway conditions (high speed and continuous) 45% of the time. But what if the car is only used in town? Or only for long distance road trips? Comparing vehicle performance using the EPA City rating or the Highway rating instead of the Combined rating can significantly affect the vehicle’s expected fuel consumption.

This issue is particularly important when comparing EVs and vehicles with internal combustion engines (ICEs). EVs’ regenerative brakes make them particularly adept at city driving but EVs tend to have lower fuel efficiency ratings for highway driving where wind resistance and the weight of the battery play a greater role.  ICE’s are the opposite. The constant starting and stopping in cities reduce their efficiency, especially for vehicles that do not have quick start engines and so sit idling at each stop light. The steady, continuous speed of highway driving, however, allows ICEs to operate in their optimized state, greatly increasing their fuel efficiency.

This fourth report in our series examines the impact of these different driving conditions on EV and ICE relative fuel cost per mile across each US state. It builds upon our earlier report that compared state-level differences in fuel cost per mile for a Chevy Cruze ICE and Chevy Bolt EV in 2016. The Chevy Cruze and Bolt models were chosen because they are roughly the same size and target the same buyer demographic. According to the EPA, the Chevy Bolt’s fuel efficiency (in miles per kWh) is rated 3.85 City/3.23 Highway/3.57 Combined, while the Chevy Cruze’s fuel efficiency (in miles per gallon) is rated 30 City/40 Highway/34 Combined. Our previous analysis used the EPA Combined City/Highway rating; this report expands the earlier analysis to include the EPA City rating and Highway ratings.

Figure 1 below compares the two vehicles’ fuel cost per mile in 2016 (using the average residential electricity tariff and average retail gasoline price for each state), with separate charts for the EPA City, Combined, and Highway fuel efficiency ratings. In each chart, the center diagonal line indicates the Cruze and Bolt have the same fuel cost per mile. In the area below the center diagonal line, the Cruze is more expensive per mile than the Bolt; the farther the data point is from the central diagonal, the greater the difference in fuel costs. 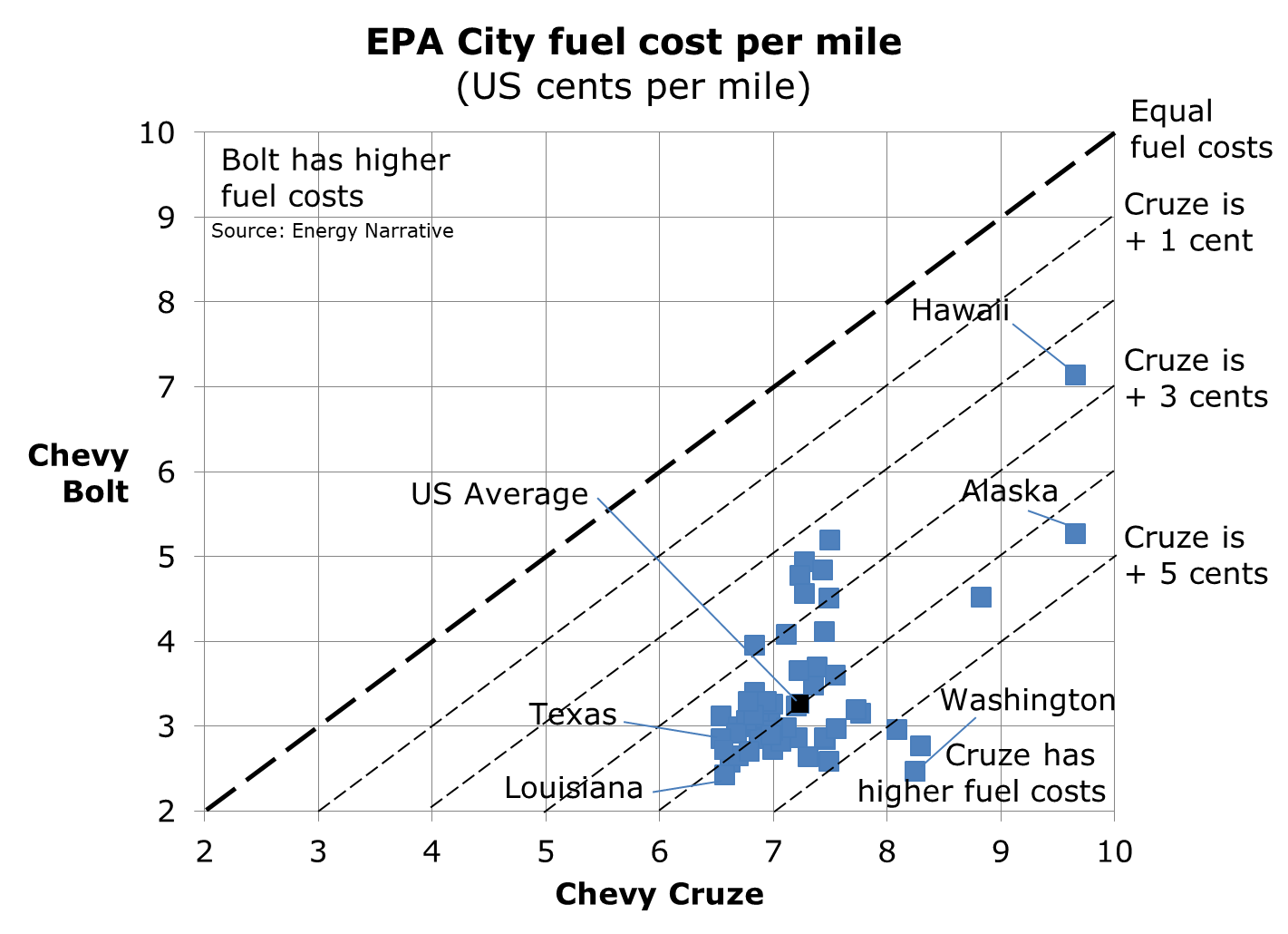 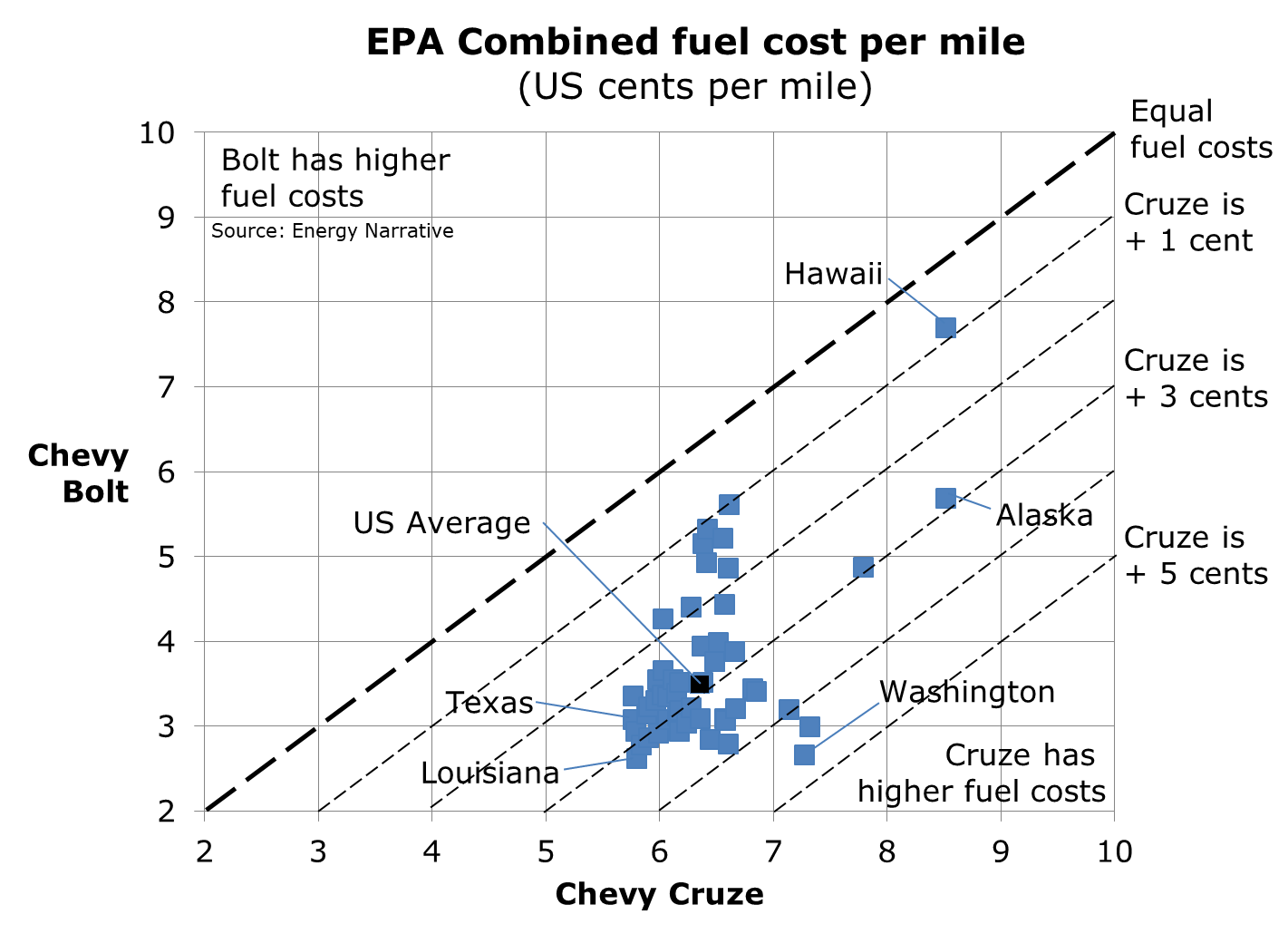 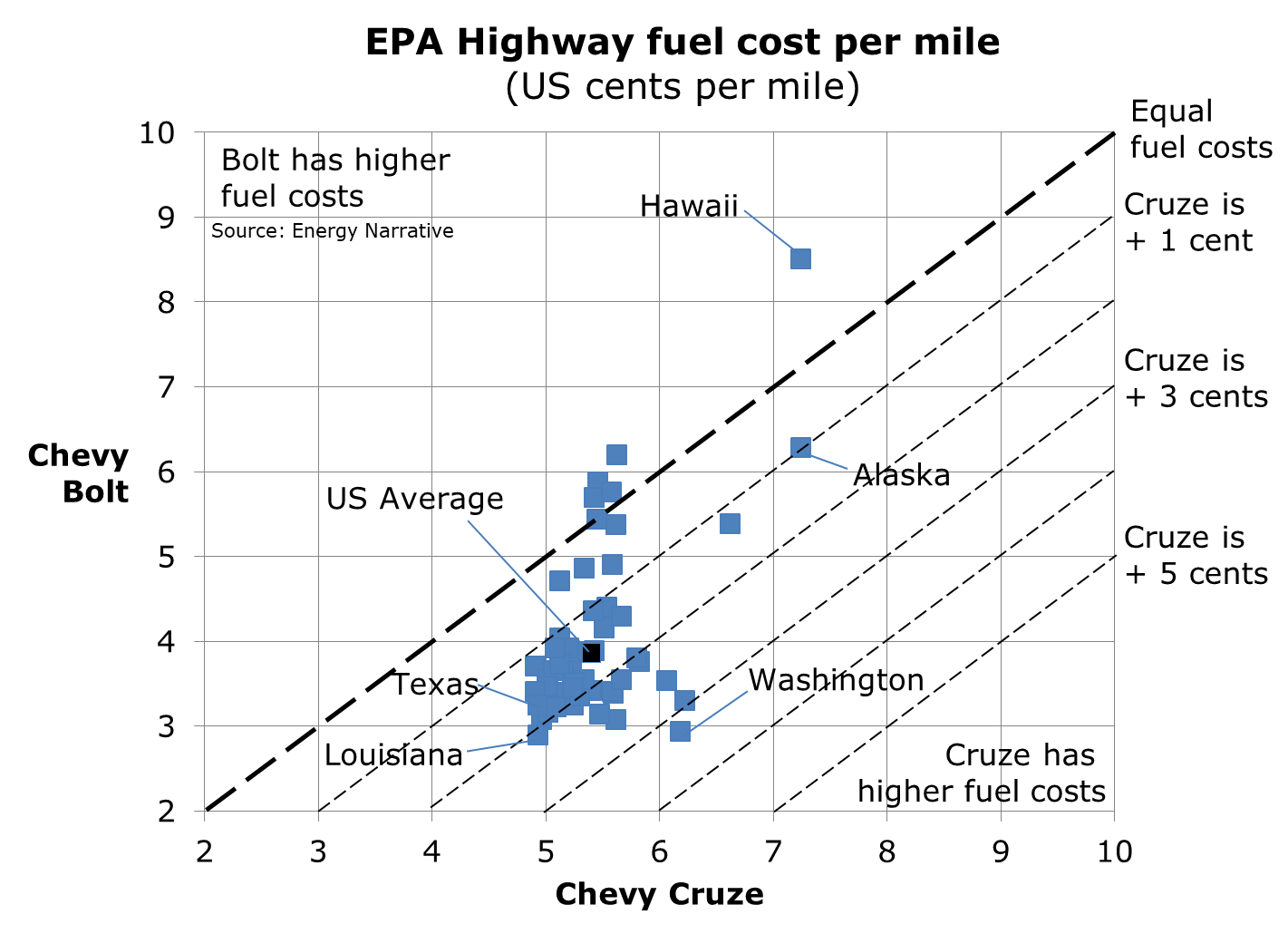 Across the three charts, each state maintains its position relative to the other states (as each chart uses the same underlying fuel prices), but the cost per mile for all states shifts left and up as EV efficiency declines and ICE efficiency increases.  For City driving, the US average fuel cost for the Cruze is 4 cents per mile higher than the Bolt. Using the EPA Combined rating, this additional fuel cost falls to just below 3 cents per mile. Under Highway driving conditions, the US average difference is less than 2 cents per mile. 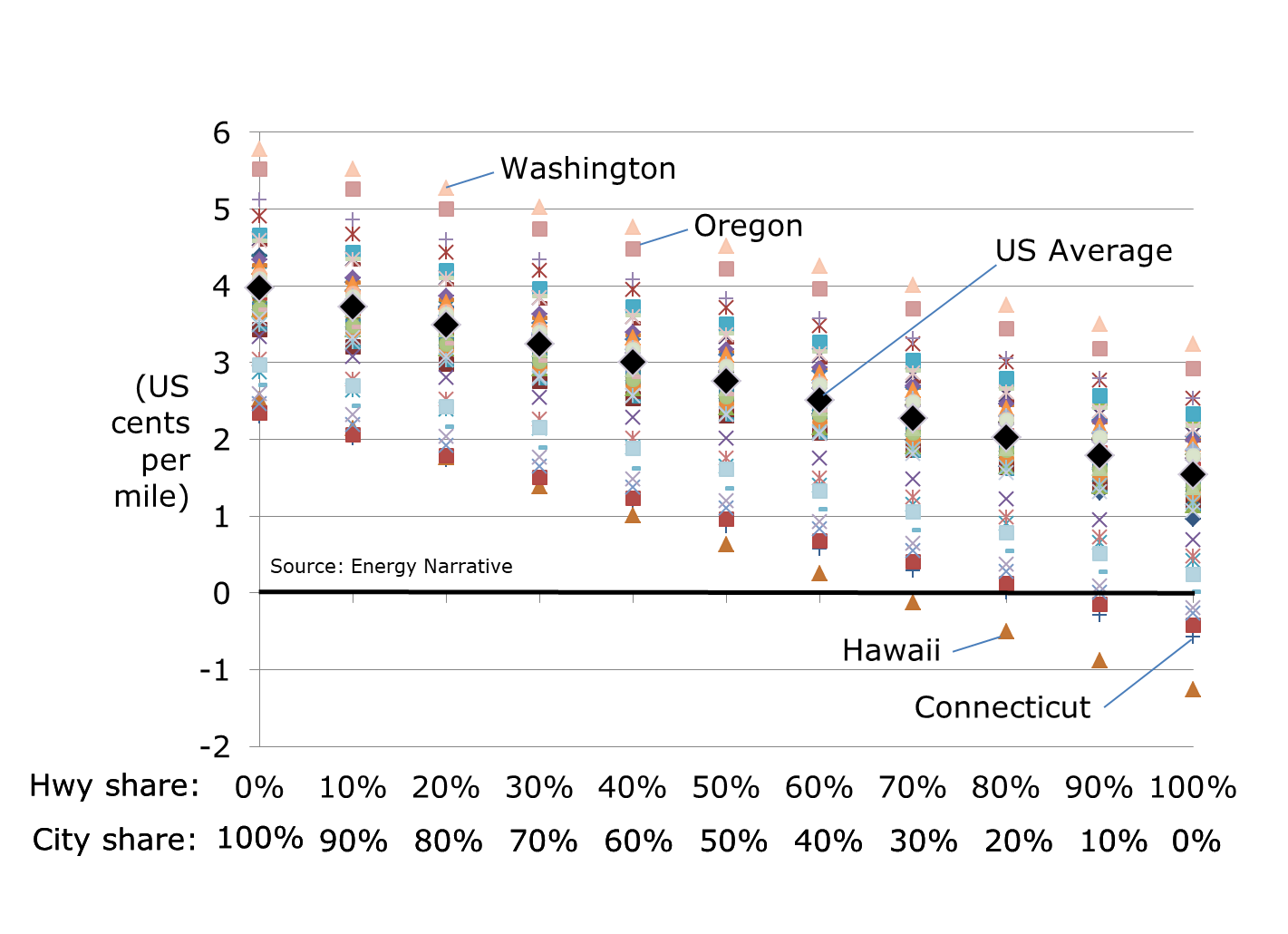 Figure 2 indicates that a Hawaiian driver that drove at least 70% of their annual miles under highway conditions would spend less on fuel with a Cruze than with a Bolt. For Connecticut and other states with high electricity costs, the share of Highway driving would have to be 90% or greater for the Cruze to have lower fuel costs.

Clearly, urban drivers that use their vehicles primarily for commuting in rush hour traffic would see the greatest benefit from switching to an EV. This matches well with the greater density of EV charging stations and EVs shorter driving range. Relying on the EPA Combined rating to assess the fuel cost savings would under estimate this benefit for drivers that do more than 55% of their driving under City conditions. Likewise, long-distance drivers may overestimate and EVs benefits if their additional miles are mainly on the highway.

A comparison of the state-level total annual fuel spend for EVs and ICEs.

The next report in this series will look at how state-level differences in annual miles driven reinforces this effect when calculating to the total annual fuel bill for EV and ICE drivers.