Mexico, Saudi Arabia, and Chile made headlines in late 2017 when auctions for utility-scale PV projects came in with bids right around US$20 per MWh (2 cents per kWh). But how real are those prices? Can project developers really deliver what they have promised?

True, the locations noted above are particularly well suited for solar power – great solar resource, available land, potentially lower cost labor for the installations. In addition, some of the winning bidders have access to very low cost capital. All of these factors help, to be sure. Most importantly, however, the ultra-low bids reflect expectations for the future cost of solar power, not what it costs today.

In each of the auctions noted above, the electricity contracts begin a few years in the future—mid-2019 for Saudi Arabia, 2020 for Mexico, and 2024 for Chile. This gives the developers time to build new projects to meet the contract. For PV installations, you don’t have to buy the panels until well into the project development process, and PV systems have a much shorter testing and commissioning process than a thermal power plant. Therefore, the prices bid into last year’s auctions represent an expectation for future PV costs and returns on investment.

The over-complicated chart below attempts to capture the interplay between falling PV installation costs (x-axis), the cost of capital (rate of return, y-axis), and the long-term fixed contract price paid for the electricity that is produced (overlaid from US$15 to US$50 per MWh). 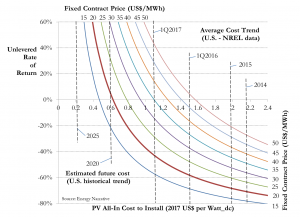 See the footnote below for details on the assumptions behind the graphic. The short answer is that a project using PV panels bought in 2020 would barely turn a profit at US$20 per MWh unless installation costs start falling even faster than they have been.  The trend decline rate since 2010 suggests that single-axis tracker utility-scale PV systems will cost US$0.61 per Watt_dc in 2020 (using constant 2017 dollars). This, in turn, results in a 3% return on capital under a US$20 per MWh, 20-year contract. In addition, small changes in contract price or cost have a big impact on the rate of return.

From the graphic, ACWA’s 2.34 cents per kWh project due to be completed for Saudi Arabia in mid-2019 would need costs well below the trend in average U.S. costs to be profitable. Mexico’s sub-2 cent bids that are due online in 2020 look risky without below average costs.  Chile’s 2.148 cent bid for a 2024 start date looks like a fantastic investment–if the cost decline curve maintains its pace that long. More generally, the analysis suggests that one or more of the following are true:

In any event, the numbers suggest that the low bidders do not have much room for error.  Should PV costs fail to decline as fast as expected, I would expect some of these low bidders to delay or abandon their projects.

Footnote: The cost data is based on NREL’s reported historical average costs for utility scale single-axis tracking PV installations in the United States.  The 2020 cost outlook is based on an exponential curve fit to historical cost data from 2010 to 2017. The fixed contract price is assumed to be for a 20 year contract, adjusted for inflation each year (as the contracts in Mexico are, for example).  The calculated rate of return assumes annual operations and maintenance costs are 1% of the initial capital cost, the panels’ output degrades 0.75% per year, the system runs 30% of the time (capacity factor), and cost per watt of AC power provided to the grid is 30% higher than the cost per DC watt generated at the panel (based on how the inverter is scaled to the panel’s size to optimize output over the course of the day).  Contact me if you’re curious about the assumptions and calculations behind the graphic.[/vc_column_text][/vc_column][/vc_row][vc_row][vc_column][/vc_column][/vc_row]