The conventional wisdom that people who drive the most will benefit the most from switching to a fuel efficient electric vehicle (EV) doesn’t always hold true. As I showed in this earlier report, EVs loose much of their fuel efficiency advantage over modern internal combustion engines (ICEs) under highway driving conditions. If drivers with higher annual mileage rack up a most of their total on the highway, the expected benefit from driving an EV may disappoint.

This fifth report in our series calculates the annual fuel spend for an EV or ICE driver in each US state, based on their share of city and highway driving. It builds upon Energy Narrative’s previous report that compared state-level differences in the fuel cost per mile for a Chevy Cruze ICE and Chevy Bolt EV in 2016 for City and Highway driving conditions. This report extends the analysis to calculate the total annual fuel bill for each state, vehicle, and driving condition by applying the state-level annual average miles driven per driver that was calculated in the third report in our series.

Figure 1 below compares the resulting annual fuel bill for the two vehicles in 2016 (using the average residential electricity tariff and average retail gasoline price for each state), with separate charts for the EPA City, Combined, and Highway fuel efficiency ratings. In each chart, the center diagonal line indicates the Cruze and Bolt have the same annual fuel bill. In the area below the center diagonal line, the Cruze is more expensive than the Bolt; the farther the data point is from the central diagonal, the greater the difference in fuel costs. 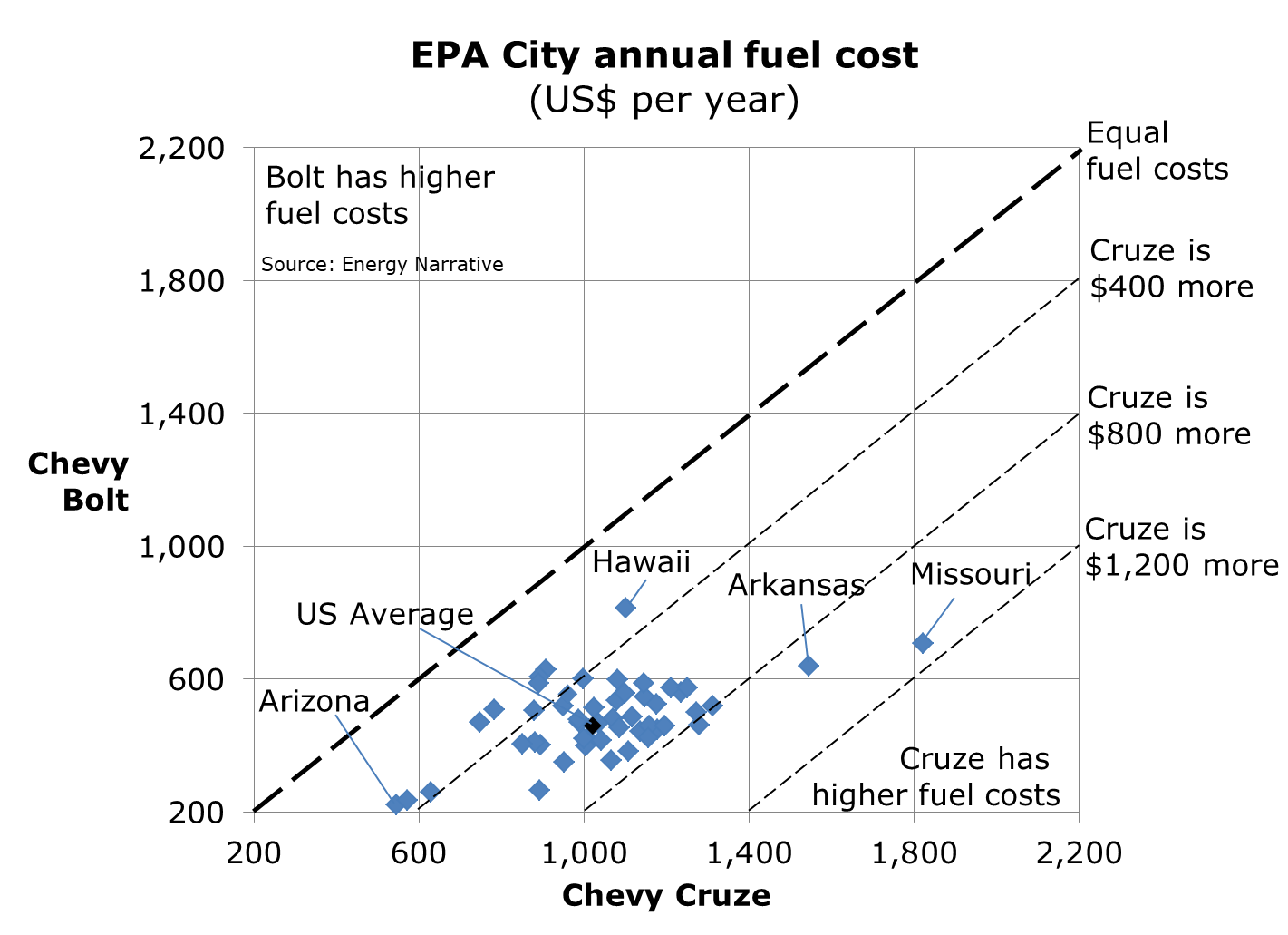 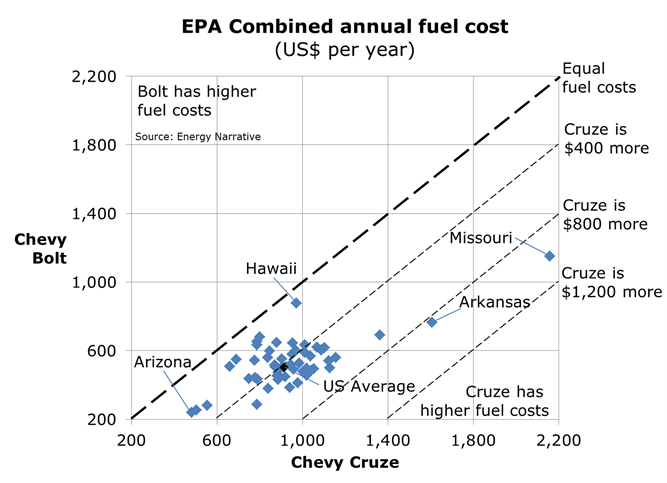 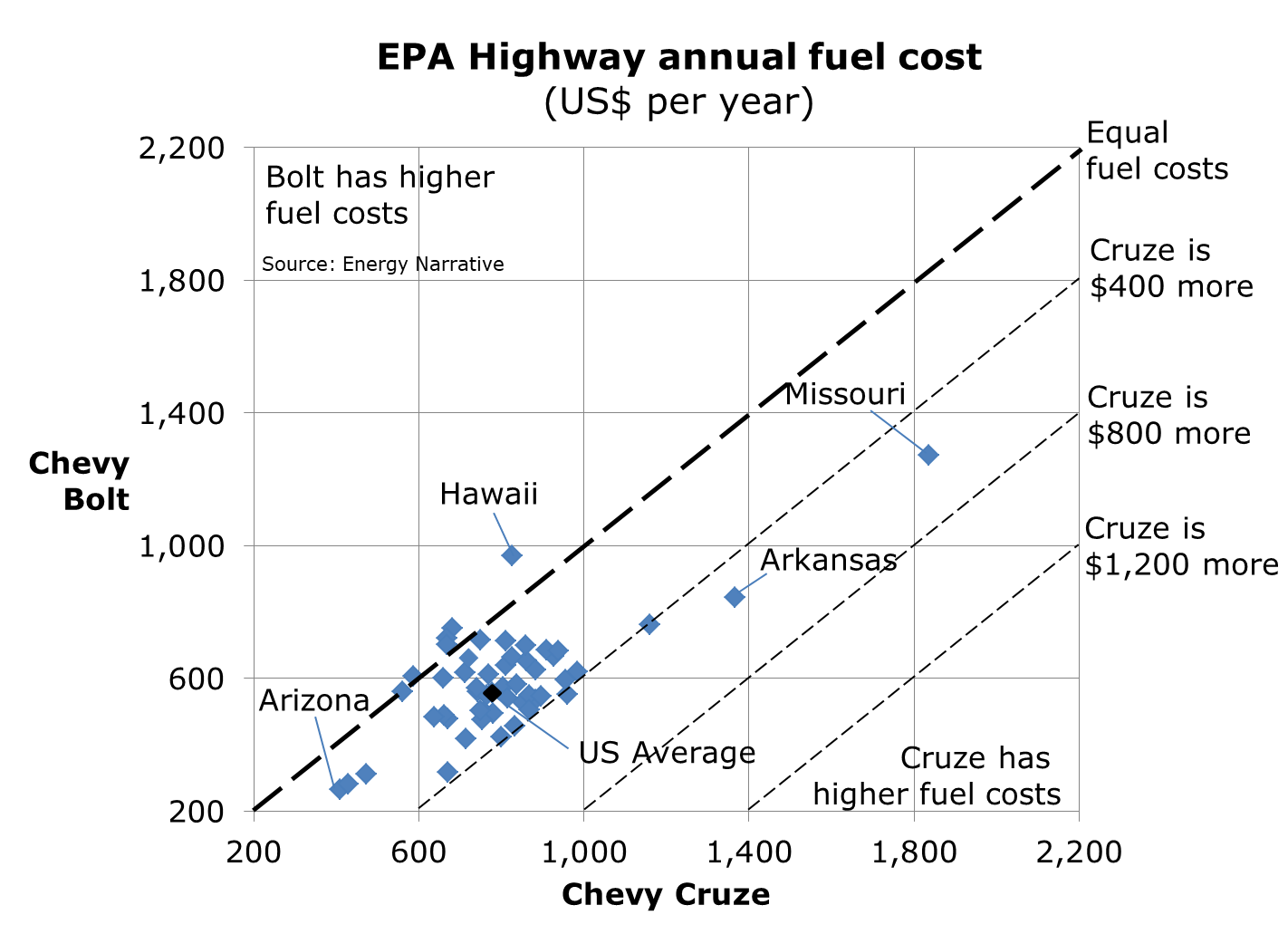 As with our previous report on fuel costs per mile, each state maintains its relative position across the three charts, but the annual fuel bill for each state shifts left and up as EV efficiency declines under Highway conditions and ICE efficiency increases.  For City driving, the US average fuel bill for the Cruze is roughly $600 per year higher than the Bolt. Using the EPA Combined rating, this additional fuel cost falls to just over $400 per year. Under Highway driving conditions, the US average difference in annual fuel bills is only slightly more than $200 per year.

Figure 2 below explores how large of an impact this has on annual fuel spend by considering a range of driving splits between 100% City and 100% Highway. The figure shows the Chevy Bolt’s net fuel cost savings per year relative to the Chevy Cruze; that is, a positive number indicates the money that a Chevy Bolt driver would save per year while a negative number indicates that the Chevy Cruze has a lower fuel bill per year. 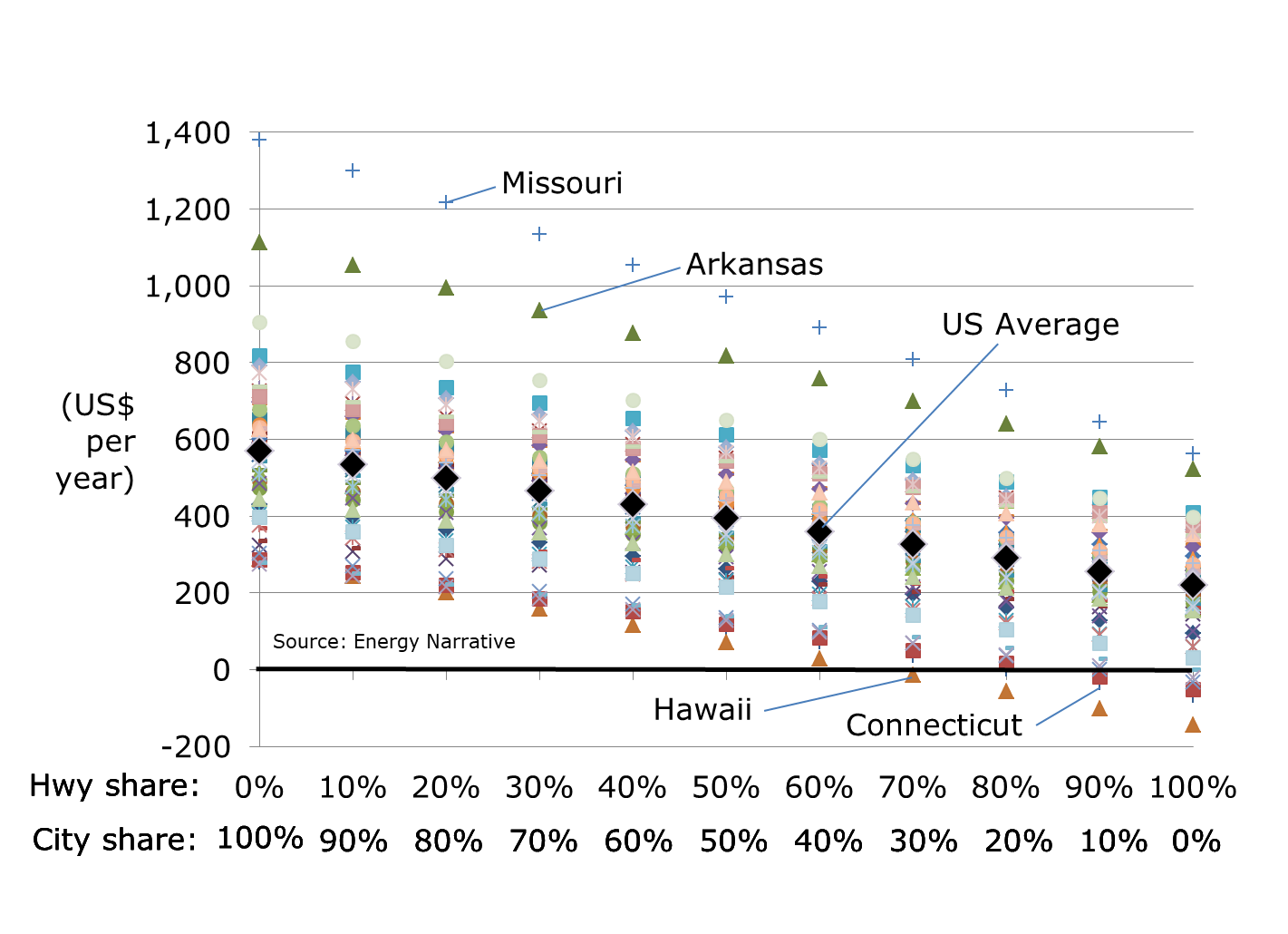 This dynamic of a lower benefit correlating with greater distance driven per year complicates the decision to buy an EV or ICE. Because EVs tend to cost more than ICEs, the higher capital cost is expected to be offset by lower annual fuel bills. Driving more per year does result in greater fuel savings, but the incremental savings diminish if the additional miles come from road trips under Highway conditions.

EVs are better for City conditions, but modern ICEs close the gap on the open road. Our previous reports focused on choosing between the two. Many Americans, however, live in two-car families while others do not own a vehicle at all, relying on a mix of ride hailing services and rental cars when appropriate. What if you opted for the best of both worlds, using an EV mainly for the daily commute and trips around town, and using an ICE whenever you get the urge for the great American road trip?  Our next report will explore the implications of this option, for individual fuel spend and for its impact on transportation oil demand more broadly.

A comparison of the state-level total annual fuel spend for EVs and ICEs.

The impact of EPA City and Highway ratings on state-level fuel cost per mile for EVs and ICEs.